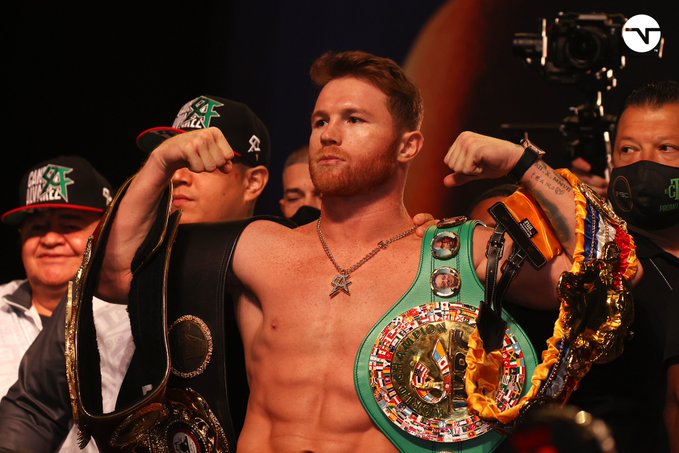 Canelo is now set to face his last and potentially most difficult fight for Super Middleweight supremacy: Caleb Plant.

The Super Middleweight unification bout is set to kick off tomorrow at around 6pm PT from Las Vegas, Nevada. It’s at 75 dollars, which is not terrible alongside a decent undercard. Already, Canelo is a four-division world champion but Plant is IBF champion. Whoever wins is the first undisputed super middleweight world champion in boxing history. The stakes can not be higher.

At 168 pounds, Canelo looked bulky and ready to deliver powerful blows. He made weight spot-on, 168lbs is the Super Middleweight limit, even going as far as to still wear a heavy gold pendant at the scale. For his part, Caleb Plant weighed in at 167 pounds:

The current IBF title holder at 168 pounds looked muscular as well, but thinner and trim as he is over 6ft tall – a bit of a liability when fighting a compact, explosive opponent.Our best guess is that Caleb Plant’s 167lb frame is an indication that he will fight at distance – “run” as some detractors say – during the fight:

Regardless, this looks to be an historic night with one man ready to unify all the belts. Reportedly, Al Haymon and Eddy Reynoso have been planning or open to additional fights.

Resumes Heading In To Fight

Each fighter has a respectable resume, but the best belongs to the current Pound-for-Pound king, Saul “Canelo” Alvarez. He has most recently defeated 2 previously unbeaten Super Middleweights and defended his title against a formidable challenger in Avni Yildrim.

With respect to Plant, he does have 4 title defenses with his best win being over Jose Uzcategui. Mike Lee was also a respectable opponent, but one would be hard pressed to compare either one with Billy Joe Saunders or Callum Smith – the two Brits defeated by Alvarez.

Canelo must KO Plant because as the PBC fighter, Plant is likely set to get the judges nod. Canelo must realize this and is predicting an 8th round KO. It’s tough to take this type of assertion seriously, with many cautioning other fighters about making such predictions. However, in Canelo’s case, most make an exception.

Personally, my fear is that this fight will be boring, with Plant excessively moving as his track leg physique indicated at the weigh-in. I hope I am wrong, but think I may not be.